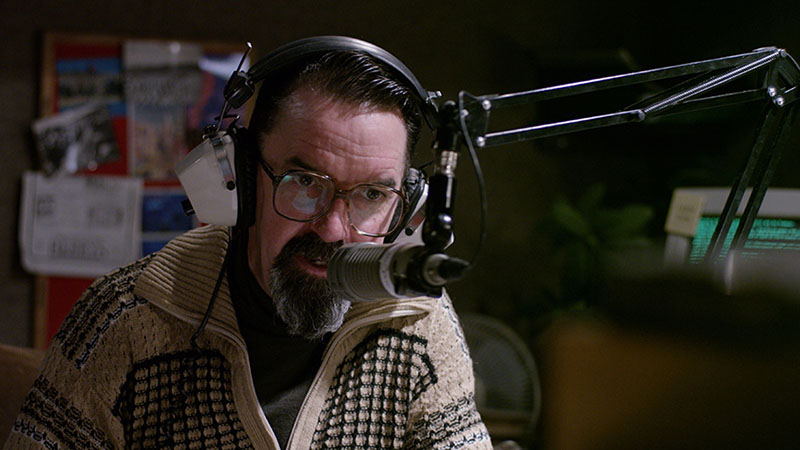 ‍For the premiere edition of FRONT International, artists from the US and around the globe will offer perspectives on aspects of “The American City” at the Akron Art Museum. Works by fifteen artists and one collective— including three works newly created for the Akron Art Museum, a major video installation, sculpture, photography, and mixed media objects— will occupy spaces throughout the museum. The diverse artistic impulses represented offer a wide range of deeply interconnected ideas that mirror the city of Akron’s ebb and flow: invention, obsolescence, optimism, vision, civicorganization, and the measure of time.

Ireland native Gerard Byrne’s video installation In Our Time transports viewers into the studio of a 1970s or 1980s commercial radio station. Chronicling the routine of a day’s broadcast, the video harks back to a pre-Spotify era when, as the artist points out, “people listened to the same things at the same time.” The studio set is meticulously constructed with vinyl records, cassette tapes, recording equipment, wood paneling and guitars adorning the scant available wall space. A twelve-hour film, In Our Time plays in sync with the actual time of day, so the deejay’s broadcast correlates to real time. The immersive installation evokes Akron’s rich musical heritage and the robust contemporary scene that gave rise to such groups as Devo, the Waitresses, Chrissy Hynde, and the Black Keys.

Akron’s FRONT presentation reflects on ways that technology, communications, advertising, industry and popular culture shape socio-economic and environmental conditions. Some artists specifically address Akron’s urban landscape. Nicholas Buffon’s self-portrait drawings depict him outside a variety of queer spaces in New York, where he lives, as well as in Akron, including the Interbelt Nite Club and Square Bar. Katrín Sigurdardóttir calls attention to dormant locations around Akron and Cleveland by placing tiles made from Icelandic clay in the earth. The presentation as a whole, reveals a multifaceted portrait of Akron as an American city, reflecting on who we are as a society and as individuals. 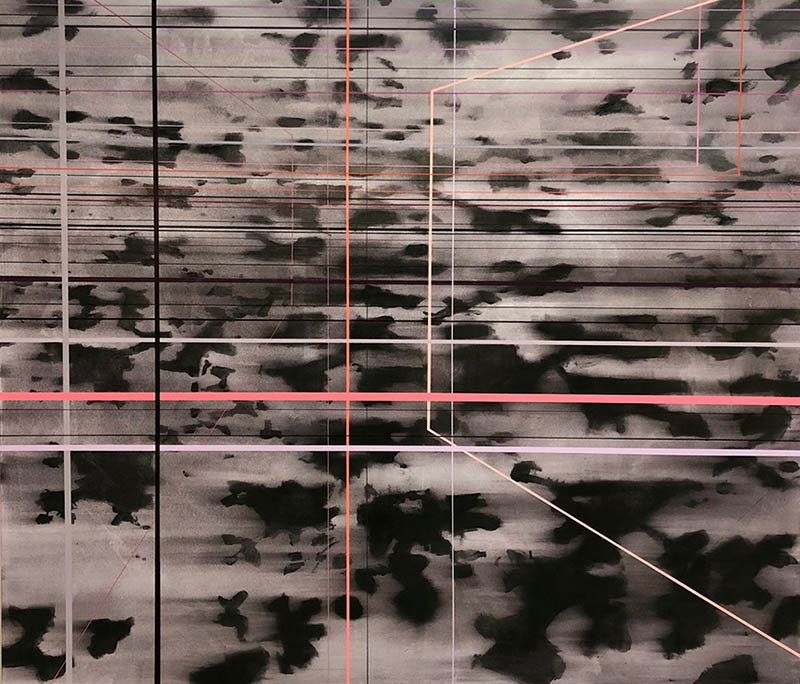 Frameworks: Paintings by Dragana Crnjak, Andrea Joki and Matthew Kolodziej presents recent paintings along with site-specific wall drawings by Crnjak and Kolodziej. The artists utilize painting to explore the complex relationships between time, memory and place, with special interest in how the influx of images and information in the digital age affect those interrelationships.

Crnjak views painting as an important foil to our addiction to moving images. Her paintings incorporate distorted images of embroidery patterns from her native Serbia, which she projects onto canvas and traces in paint. She then layers crisp, geometric lines on top of the fragmented patterns, creating compositions that appear to recede and advance at the same time. Joki creates paintings that meld
sensory experiences of landscapes, people and places, drawing on impressions she observes during her travels. She paints both in loose, spontaneous brushstrokes and precise, hard-edged lines, sometimes layering those differing impulses in a single composition. The resulting veiled prisms of splattered paint undulate and flicker. Through painting, Joki seeks to discover the limits of what a painting can communicate about the world’s interconnectedness. Kolodziej assembles photomontages from photographs of construction and demolition sites. Using a computer program, he translates the collaged images into line drawings that form the basis of his multifaceted, architectural paintings. The artist is especially interested in how the relentless volume of images that we process on a daily basis affects our way of seeing and our sense of place.

The artists in Frameworks chart a combination of sensory experience, memory and data from external sources in their paintings. While each artist attempts to impose structure on elusive concepts, their constantly shifting compositions evidence a simultaneous embrace of the unknowable.

Frameworks: Paintings by Dragana Crnjak, Andrea Joki and Matthew Kolodziej is organized by the Akron Art Museum and supported by funding from the Ohio Arts Council and the John S. and James L. Knight Foundation. 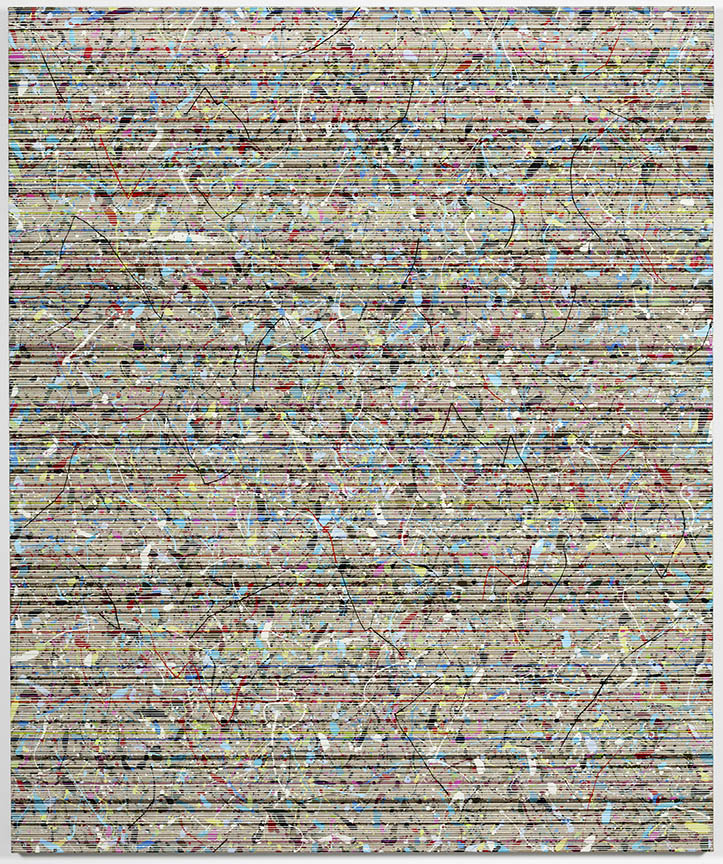 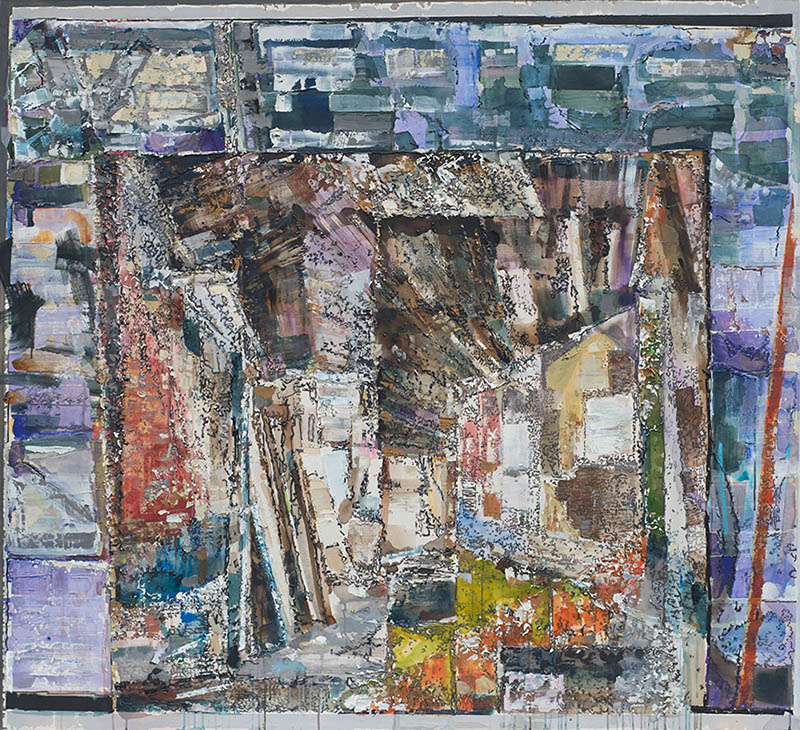 Jerry Birchfield’s work flows between standard definitions of art media. He uses photography, sculpture, drawing, and text in his measured, time-intensive art-making practice. Asleep in the Dust debuts a large sculpture titled Yes, They Were Made to Level. A glass platform modeled after a stage holds precisely arranged objects made from basic materials, such as wood, plaster, papier-mâché, white paint, and cardboard. Through a series of intentional gestures, Birchfield placed these understated objects so they relate to each other on multiple levels, forming micro-compositions within the whole of the sculpture.

This major installation complements the material nature of the photographs and wall sculptures included in the exhibition. Birchfield’s photographs, printed using layers of darkroom processes, blend abstract and pictorial elements to create electric black and white images. The artist encases some printed photographs in plaster, obscuring the images while asserting their physical presence. Asleep in the Dust highlights Birchfield’s use of photography as a starting point in a body of work that raises questions about how photographs function in art and in our aesthetic experiences.

Jerry Birchfield: Asleep in the Dust is organized by the Akron Art Museum and supported by funding from the Ohio Arts Council and the John S. and James L. Knight Foundation

The artist carefully constructs each aspect of his work in the controlled space of the darkroom or his studio, where scraps and unfinished works often reappear in new forms. 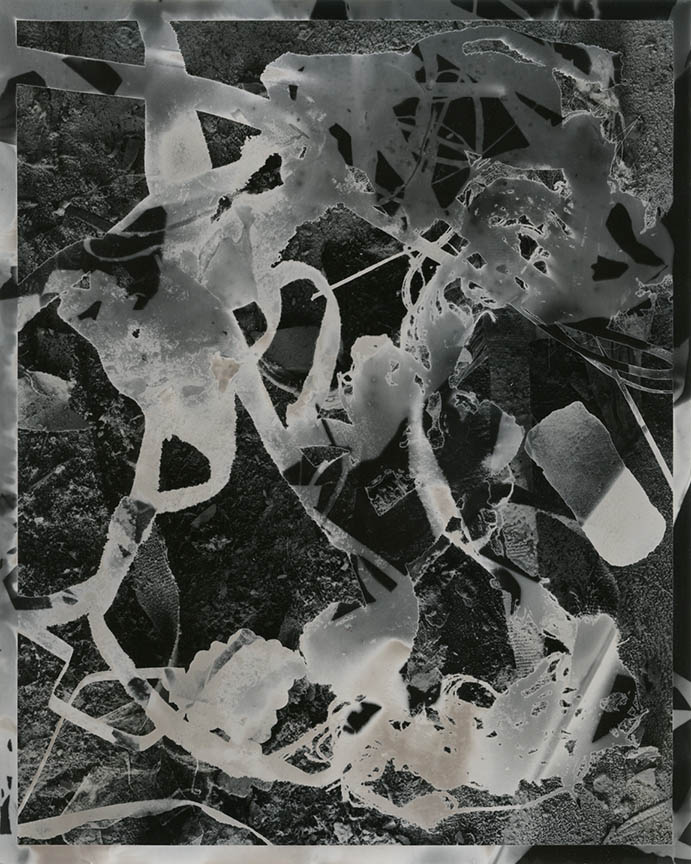 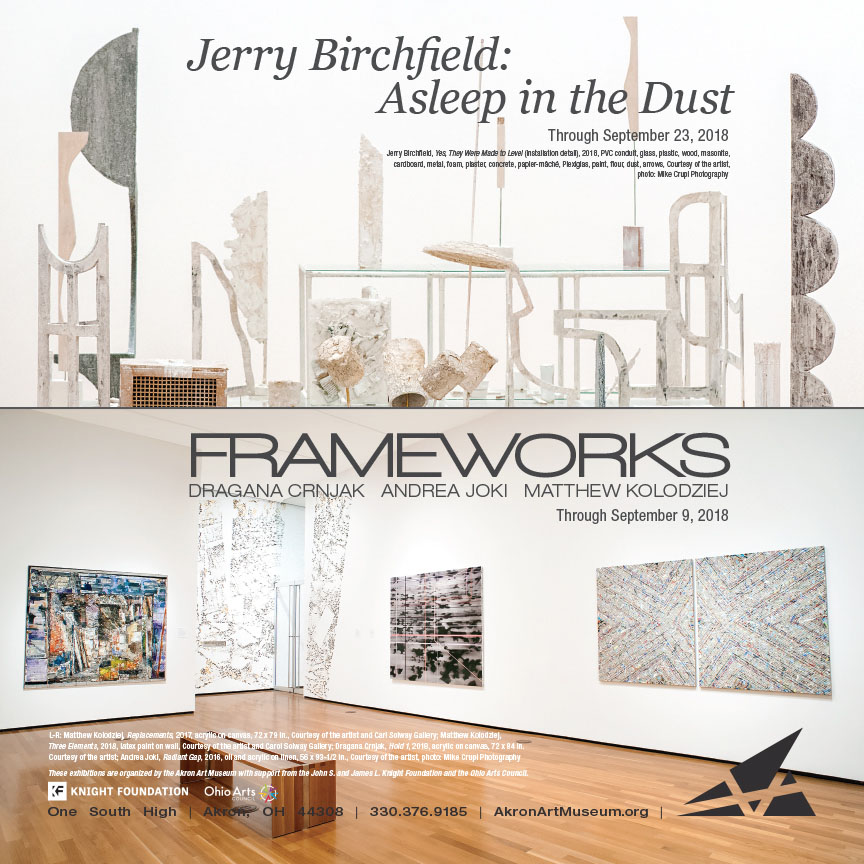