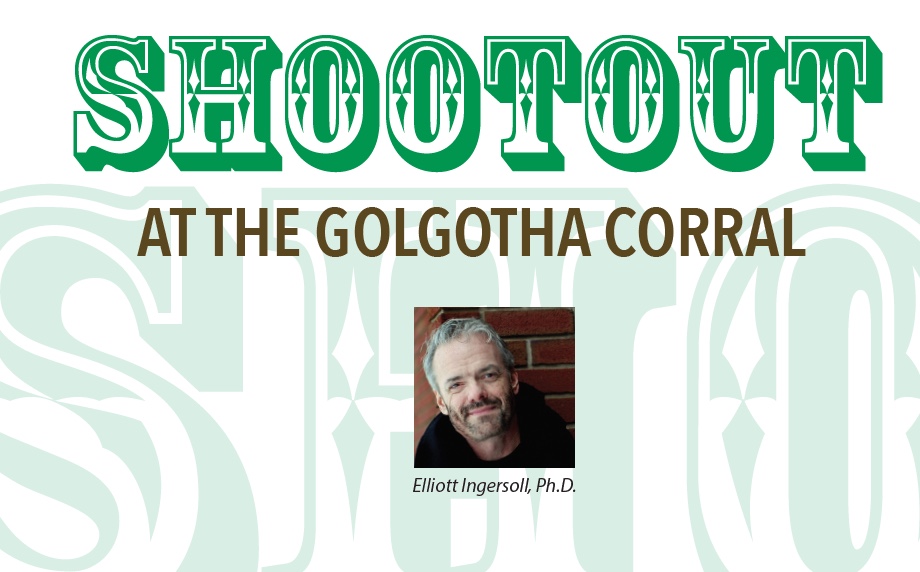 THE POINT OF THIS ARTICLE is to point out that practicing Christianity is incompatible with enthusiasm for handguns. I specify handguns because, while handgun hunting is a subset of hunting with firearms, it is practiced by a small percentage of people compared to those whouse bows, crossbows, and rifles. The impetus for this article was a recent meeting with a man who described himself as a “gun-carrying, freedom-loving, tongue speaking Christian.” As a psychologist with background in theology, I was immediately riveted as to how a person could embody two such antithetical allegiances. I’ve spent a lot of time with gun-carriers and patriots. I’ve also spent a great deal of time with Christians whose worship practice includes the gift of speaking in tongues. But, I’ve never really met anyone who claimed to embody all of the above. I hope that writing about it will encourage others to think about whether “guns and God” really go together. I have some background for the task. Earlier in my life, I was on course to become an Episcopal priest. It was the intervention of my mentor in the church that led me from theology to psychology. In the meantime, I had learned a great deal about Christianity. I’ve also trained with rented handguns; learning the basics of shooting and maintaining the weapon, though I’ve never wished to own or carry one. So, with that said, here are my thoughts and feelings on the issue.

What Would Jesus Do?
‍“WWJD” or “What Would Jesus Do?” became a popular meditation in the 1990s for followers of Christianity to contemplate the moral imperative to act in a manner that would demonstrate the love of Jesus through their own actions. This spurned a small industry of WWJD wristbands worn by Christians of many denominations (there are over two-hundred fifty variations of Christianity practiced in North America) to remind them of that imperative. A moral imperative is a strongly felt principle that, ideally, should affect a person’s behavior. In this case, that behavior would be the Christian’s; trying to respond to situations as Jesus might have. So how might carrying handguns be compatible with this imperative? What about “guns ‘n God?” 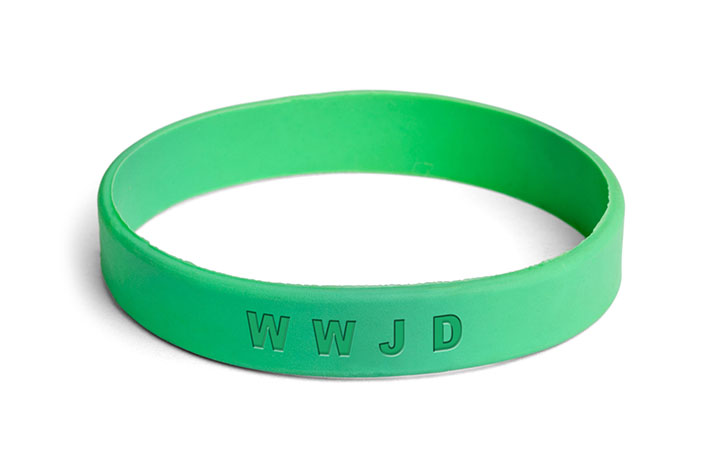 Now, in fairness, Jesus is thought to have done most of his preaching beginning about A.D. 27 and this lasted about one to three years. Jesus’ life was lived under the Roman Empire in which the most advanced weaponry were javelins, swords, and daggers. The “poor man’s conceal and carry” was more often than not a rock or a stick which the people of the times used with great zeal. From the stories about him, Jesus’ methods seem far subtler than beating someone with a rock or a stick. In a story from the Gospel of John, a woman is about to be stoned for alleged adultery. The scribes and Pharisees making the accusations ask Jesus if the woman should be stoned as was the rule under Mosaic law. He tells the accusing crowd that the one among them without sin should cast the first stone. This seemed to induce cognitive dissonance in the members of the mob, deflate their self-importance, and they dispersed. Jesus then asks the woman if anyone has condemned her. She says no one has and he says that he does not condemn her either and advises her to go forth and try to do better (“sin no more”). Jesus seems far more adept at human psychology than I’ll ever be.

I would make a case that Jesus was pointing the people in the crowd back to themselves. Who among us has not missed the mark (the Greek etymology of “sin”) in living out our moral code whether Christian, atheist, Muslim, Buddhist, etc? In suggesting the people examine their own behaviors, Jesus was encouraging a type of self-reflection that is in short supply today. If we are responsible for our behaviors, we are responsible for the stories we tell ourselves that underlay our behaviors. What sorts of stories do people encourage in their own minds to talk themselves into carrying a handgun? In many cases, people have been victims of violence and want to protect themselves from further violence. Fair enough, but even then, if one is assaulted by surprise, one is unlikely to be able to pull the weapon, switch off the safety, and fire. As a psychologist, many people have told me unrealistic stories they tell themselves about being the “good guy with a gun” (these are almost always men). Their fantasies about breaking up a robbery or assault fail to include overcoming the delay in reaction time that adrenalin and surprise usually cause, how to differentiate between bystanders and “bad guys”, as well as the fact that handguns are exponentially less accurate as the distance between the gun and the target increases. All these factors make the “good-guy-with-a-gun” more fantasy than reality. If it were a common scenario, we’d hear more stories of it working out that way.

Later in the same Gospel (the story appears with variations in other Gospels), Jesus has been betrayed by Judas who has led yet another mob to him. Their aim is to haul Jesus off to what we would call a “kangaroo court” where, as readers know, he is eventually railroaded to the death penalty. In this version of the story, the first apostle Jesus enlisted, Simon Peter (known as Peter), whips out a sword and cuts off the ear of the high priest’s servant. Even in biblical times, servants get the short end of the existential stick. Now, the“ good-guy-with-a-gun” mentality would have the apostles whip out their sticks and beat the mob senseless. This of course does not happen. Rather than use the moment to stage a dramatic get-away, Jesus simply admonishes Peter and submits to arrest. While Jesus certainly had a destiny that differs from mere mortals, what does this teach us? Jesus’ response to Simon Peter is to basically say, “Put your sword away. This is the cup the Father has given me; shall I not drink it?” It seems to be his way of saying “Who are you to dispute my destiny?” Peter’s indignation fades to self-preservation as he later denies Christ three times, much to his own chagrin and shame.

So what are we to learn from these stories? While some biblical scholars note that the story of Jesus and the adulteress may have been a later addition to stories about him, most agree it was to demonstrate that Jesus came to save, not condemn, humanity. The story manages to convey that he understood the law as well as he understood the accusers’ motivations. In doing so, I am guessing he diverted them from a course of action they would regret. I imagine Jesus might find a way of reminding a “good-guy-with-a-gun” that there is a heavy price to pay for taking a life, and point that person inward to consider their own motivations. As for his arrest and subsequent execution, Jesus says that his kingdom was not of this world and, if it were, his servants would fight to prevent his arrest. So again, he astutely recognizes our species will always fight over kingdoms rooted in this world. But, if someone is wondering “What would Jesus do?” then haven’t they put their stock in a better world yet to come? A better world to be made here? Anyone wondering what Jesus would do, would surely explore other means of intervening and perhaps offering a chance to the victim and the “bad guy.

”This raises another theme that is consistent in the practice of Christianity and other religions – the possibility of what some theologians call “metanoia,” a change of heart or spiritual conversion so complete that it transforms a person for the better. In this case, “for the better” usually means with more concern for their fellow beings and what is important in life. It was, in fact, just such a conversion that transformed Saul of Tarsusinto the person most Christians recognize as St. Paul – the person who more than anyone brought Christian teachings to the first-century world. As “Saul,” he was dedicated to “breathing out threatenings and slaughter against the disciples of the Lord” and otherwise persecuting the early disciples of Jesus. Imagine a “good-guy-with-a-gun” getting to Saul before God did on the road to Damascus. Can we ever truly know what another human is capable of or how their destiny may unfold? Can we ever truly account for what is potentially lost if a life is taken? When did so many in our society stop thinking about such questions? I hope those who believe “guns and God” go together will at least start considering what that really means.