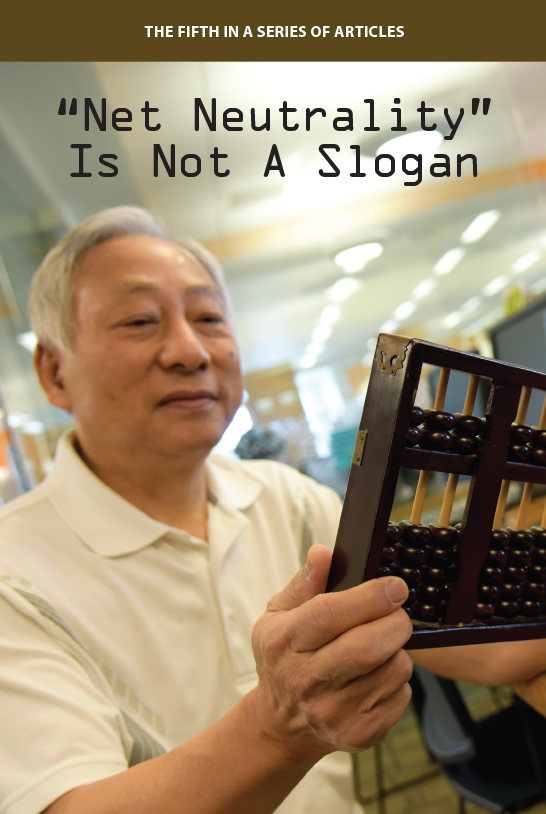 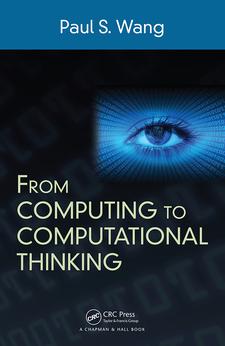 A Ph.D. and faculty member from MIT, Paul Wang (王 士 弘) became a Computer Science professor (Kent State University) in 1981,and served as a Director at the Institute for Computational Mathematics at Kent from 1986 to 2011. He retired in 2012 and is now professor emeritus at Kent State University. Visit Paul's website
The book From Computing to Computational Thinking can be ordered at: computize.org

Introduction
In mid-May 2018, the US Senate passed (52 – 47) a Congressional Review Act aimed at overturning the December 2017 reversal of the Obama-era (2015) net neutrality rules by the Federal Communications Commission (FCC) chaired by Trump appointee, Ajit Pai. The Senate act is sure to ignite another round of debate on net neutrality. It is perhaps a good time for us to take a closer look at net neutrality in theory and in practice.

This is the 5th article in our Computational Thinking (CT) series (Earlier articles are in Vol. 13 to 16, aroundkent.net) which aims to sharpen our digital minds and give us a powerful way of thinking through a deeper understanding of modern computing technologies.

Net Neutrality – the Idea
The term “network neutrality” was first introduced by Tim Wu (a law professor at University of Virginia) in 2003. Today, network neutrality as an idea can be simply stated as: “There should be no discrimination of data being transmitted on public broadband networks, wired and wireless.”

Net neutrality is part of a set of related principles aimed at keeping the Internet open, transparent, easily accessible to all, without censorship, and a level playing field. Indeed most, if not all, concerned agree that such an Internet is best for the public interest, for innovation, and for fostering new businesses and services.

Net neutrality wants to prevent broadband operators and other Internet Service Providers (ISPs) from treating network data differently to give themselves a competitive edge over others, or to create difficulty for services provided by others.

Net Neutrality – Violations
On freepress.net, in the article “Net Neutrality Violations: A Brief History”, Tim Karr listed a number of well-documented cases of abuse, including:

• COMCAST
In 2005, the largest ISP in the US began secretly blocking peer-to-peer technologies. Users of services like BitTorrent and Gnutella were unable to connect to these services. Later, investigations (by AP and others) confirmed that Comcast was indeed blocking or slowing by throttling file-sharing applications without disclosing this fact to its customers.

• WINDSTREAM
In 2010, Windstream Communications, a DSL provider with more than a million customers at the time, copped to hijacking search queries made by users using the Google toolbar within Firefox. These queries were redirected to Windstream's own portal and search results.

• AT&T
From 2007 – 2009, AT&T forced Apple to block Skype and other competing VOIP phone services on the iPhone. The Google Voice app received similar treatment from carriers like AT&T when it came on the scene in 2009.

And, there are many other cases worldwide.

As this history shows, the Internet needs protection from abuse and consumers alone won’t be enough to prevent powerful operators from
misbehaving.

The Structure of the Internet
The Internet evolved from the ARPANET, a US Department of Defense Advanced Research Projects Agency (DARPA) sponsored research project for reliable military networking in the late 1960s. A design of flexible message routing and no possibility of central control ensures network reliability under wartime conditions. The experimental network started with four nodes: University of California Santa Barbara, Stanford Research Institute, UCLA’s Network Measurement Center, and University of Utah.

Today, the physical Internet consists of (A) hardware computing devices belonging to end users and businesses as well as (B) specialized networking devices for transporting and routing data from sources to destinations.

(A) End-user LAN and Hosts A computer connected on a network becomes part of the network and is known as a host on the network. A LAN (Local Area Network) is an in-house private network.

(B) ISP networking Devices These include specialized networking equipment and high-speed data
links that collectively create and support the Internet infrastructure
for data transport.

The reliability and resilience of the Internet infrastructure result from its high degree of redundancy (multiple routes between nodes) and the fact that it neither needs nor allows central control or coordination.

The preceding figure shows the tiered Internet architecture where, generally, smaller tier 2 and 3 ISPs connect to larger tier 1 networks for delivery of traffic to destinations served by other ISPs. Tier 1 networks form the main Internet backbone. A typical backbone network uses fiber optic trunk lines, many fiber optic cables bundled together, for increased speed and capacity. Bandwidth between core nodes on a backbone can reach 100 Gbs or more.

How the Internet Transports Data
Everything on the Internet – emails, pictures, music, videos, webpages, etc. – is represented by nothing but digital data. Data on the Internet are sent and received in packets. Thus, the Internet is a packet switching network. Similar to a letter, a packet envelops a small block of data with address information so the data can be routed through intermediate nodes on the network, which is shared by all connected users. The network uses routing algorithms to efficiently forward packets to their final destinations.

For computers from different vendors, under different operating systems, to communicate on a network, a detailed set of rules and conventions must be established for all parties to follow. Such rules are known as networking protocols. Guess what? The basic protocol on the Internet is IP, the Internet Protocol. Each higher-level networking service follows its own specially designed protocol on top of IP. For example, the Web uses the Hypertext Transfer Protocol (HTTP). Protocols govern such details as:

Thus, for a process on one host to communicate with another process on a
different host, both processes must follow the same protocol. The Open System Interconnect (OSI) (See the following figure) provides a standard layered view of networking protocols and their interdependence. The corresponding layers on different hosts, and inside the network infrastructure, perform complementary tasks to enable data exchange between the communicating
processes P1 and P2. In the Internet Protocol Suite, the basic IP is a network layer protocol. The TCP (Transmission Control Protocol) and UDP (User Datagram Protocol) are at the transport layer. The Web’s HTTP (Hypertext Transfer Protocol) is at the application layer. 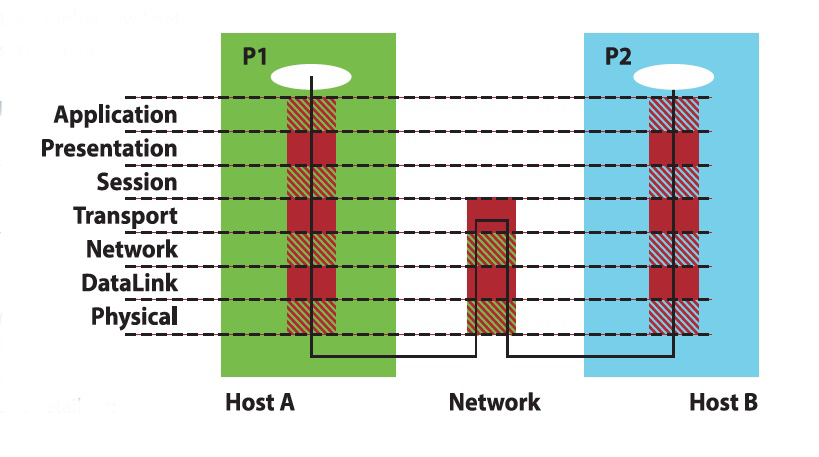 Net Neutrality – Stakeholders
With respect to net neutrality, the main groups of stakeholders are:
1. Internet service providers
2. Content and user/customer service providers including Netflix, Google, Facebook, Skype, Amazon, EBay, YouTube, and all the websites.
3. Individual and business end users whose computers and internal networks are connected to the Internet via ISPs.
4. Local and Federal government agencies who want to keep the Internet fair and efficient for the public good.

All these stakeholders pretty much agree and support the goals and principles of net neutrality. They disagree on how best to achieve them.

Net Neutrality – Principles
A July 10, 2014 article published by the Association of Research Libraries “Net Neutrality Principles" states: (we) believe that the FCC should adopt enforceable policies based on the following principles to protect the openness of the Internet:

And this list appears to be logical and generally accepted. The 2015 net neutrality rules placed broadband services under Title II of the Communications Act and explicitly prohibited blocking, throttling, and paid prioritization.

Net Neutrality – the Debate
In today’s world, the Internet is a vital public service. Its availability, affordability, healthy growth, and innovative development are important public policy concerns. However, the Internet is also a global infrastructure that is technologically complicated and economically multifaceted.

Because the Internet is so important for everyone, it is understandable that net neutrality becomes such a hot topic. Let’s look at two sample issues in the debate.

First, some say that because the internet is vital to the public, it should be treated as a “public utility”, a form of regulated monopoly. However, consumers enjoyed much improved services and significantly lower prices only after the “Ma Bell” monopoly ended.

“For over a century, economists have long cautioned that treating infrastructure as a quasi-public monopoly should only be considered a last resort to overcome severe market failings,” stated an article by the Harvard Business Review.

Second, the net neutrality principle against paid prioritization may seem at first to provide a level playing field that can help newcomers compete against well-established players. But the reality can be quite different – It may not help newcomers much or at all. According to phys.org:

The major edge companies – Google, Netflix, Amazon, Facebook, etc. – invest hundreds of millions of dollars in private “content delivery networks.” These are networks that they use to bypass the vast majority of the Internet to offer consumers better service. In other words, they are already paying for prioritized access – they’re just not paying the ISPs for it directly.

There are a good number of other such points in the healthy net neutrality debate, including what would be the impact of the new FCC net neutrality rules on the Internet and all its users. Some fear the worst – higher prices, less choices, and widespread discrimination of Internet traffic. Others say that’s unlikely to happen and the FCC can still take actions (under Title I) against violations, as history has shown. Others say the Internet has changed so much since 2015, we really need to rethink how best to regulate it.

Different voices from many directions and interest groups seem endless, contradictory, and confusing. Do a Web search and you’ll see what I mean.

Summary
In summary, despite all the debate, we must remember one fundamental fact. Namely, the Internet we love so much is the result of being a world-wide distributed system with no central control. That is its unique advantage and reason for success. Whatever we do in the public policy arena, we want to avoid setting up all-encompassing, rigid, and inflexible rules.

Perhaps the right way forward is for the Internet community – ISPs, content providers (large and small), news organizations, consumers, and government agencies at different levels – to be vigilant and to raise red flags whenever misuses occur. If history of the Internet is any guide, remedies and interventions will be found and implemented to keep the Internet widely accessible,neutral, fair, and profitable for all.

Indeed, “net neutrality” is not a slogan to divide people into for and against camps. It is an ideal we all should help to achieve. Just like Internet security (See an earlier CT article), the Internet will always only be as good as its stakeholders want to make it.

I hope you find this article useful and please feel free to give your feedback to me at (pwang@cs.kent.edu). I look forward to
continuing this series of articles on CT.