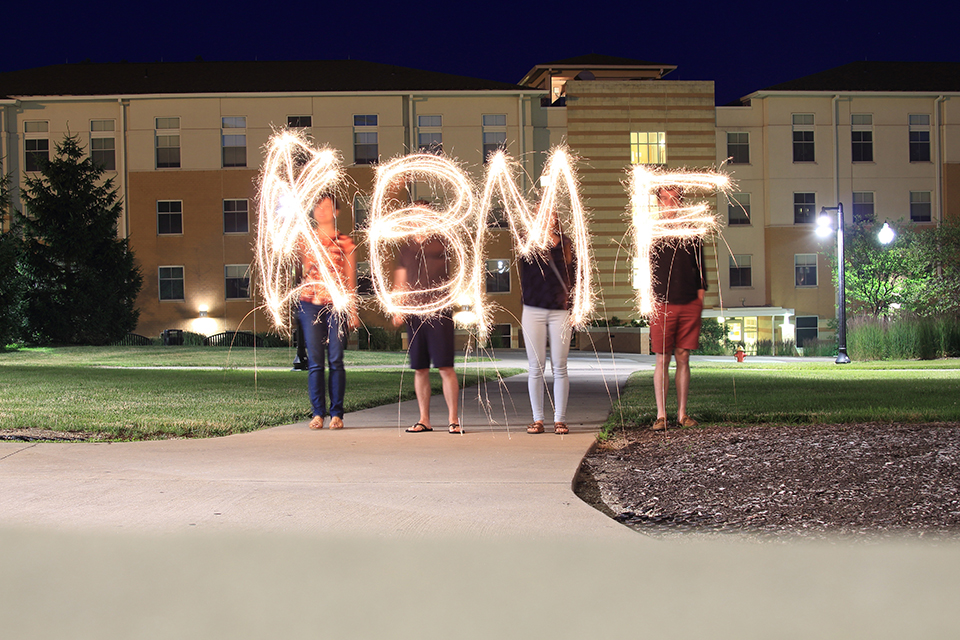 A MUSIC GEM IN NORTHEAST OHIO

In 1967, a talented committee generated the concept of forming The Blossom Festival School, a summer music festival that would train future generations of classical musicians, artists, and musical theatre performers in Northeast Ohio. George Szell, Music Director of The Cleveland Orchestra and Louis Lane, Associate Conductor of The Cleveland Orchestra became co-founders of the program along with John A. Flower, Dean of the College of Fine and Professional Arts and Lindsey Merrill, Director of the School of Music at Kent State University.

In its first season in 1968, The Blossom Festival School’s goal was to provide the experience of comprehensive and intensive study and performance with distinguished musicians, and to this day, this goal remains intact. After a few name modifications, this program is now known as the Kent Blossom Music Festival (KBMF). It brings 43 students, from major conservatories and schools of music all over the world, to Kent State University for a five-week 'in residence' session to receive lessons, masterclasses, and chamber music coaching from members of The Cleveland Orchestra and Kent State University faculty. Faculty of KBMF perform five concerts throughout the summer and students perform a minimum of nine concerts at Kent State’s Ludwig Recital Hall, the Hudson Library & Historical Society, and Laurel Lake Retirement Community. Thanks to the generosity of the Kulas Foundation and the Kulas Visiting Artist Series, KBMF is able to bring world-renowned guest artists to work intensively with these gifted students. 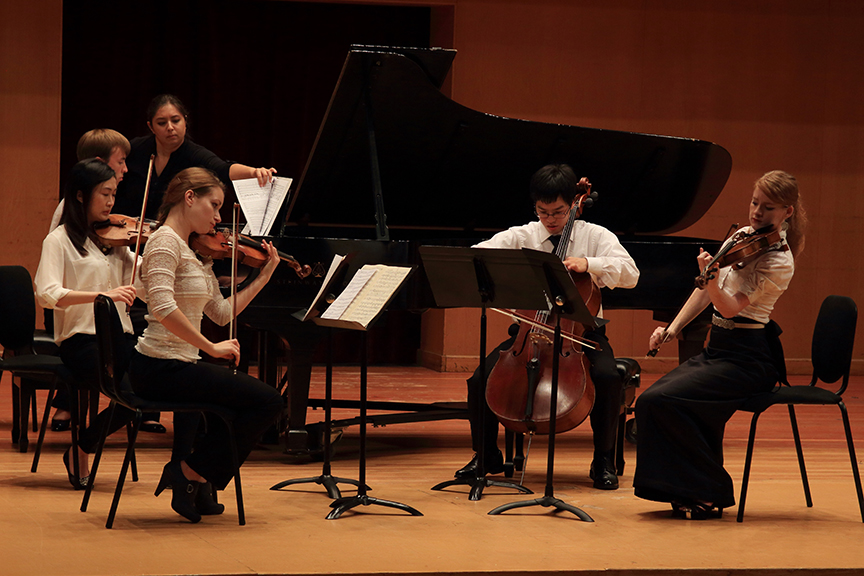 This year, KBMF will be celebrating 50 years of educating and attracting some of the finest chamber music to Northeast Ohio. To celebratethis milestone, the Emerson String Quartet will perform a special concert on Wednesday, July 18 at 7:30 pm in Ludwig Recital Hall. The Emerson String Quartet has amassed an unparalleled list of achievements over four decades with more than 30 acclaimed recordings, nine Grammys® (including two for Best Classical Album), three Gramophone Awards, the Avery Fisher Prize, Musical America's "Ensemble of the Year", and collaborations with many of the greatest artists in music history. David Shifrin, a former alumnus of this program and renowned clarinetist, inaugurated the Kulas Visiting Artist Series in 2013. Mr. Shifrin shares his thoughts about KBMF in an interview with ClevelandClassical.com:

The summer I was there had to be one of the most intense and interesting times during Kent State’s history. Musically, in addition to Louis Lane working with the student orchestra, Pierre Boulez also did an enormous amount of work with the students. We played Messiaen’s Oiseaux Exotiques and he coached Schoenberg’s Pierrot with the great Jan de Gaetani and a student group. It was a remarkable experience. … Aaron Copland also came as a guest and I remember being coached by him on the song he set for flute clarinet and soprano, As It Fell Upon a Day. Just walking into the cafeteria and seeing Aaron Copland with his tray sitting around and talking about music with the students was pretty amazing. Yes, Boulez, Copland, de Gaetani and members of The Cleveland Orchestra – it was pretty inspiring. Other KBMF’s most successful alumni will return to perform and teach during the summer’s festival. 1969 alum, violinist Philip Setzer recalls:

The experience I had at Kent Blossom not only prepared me well for college, it also led directly to my forming a string quartet a year later, which later became the Emerson String Quartet. … I remember walking with my parents (who were both members of The Cleveland Orchestra) after our performance of the Brahms C Minor Piano Quartet and remarking that I thought this is what I wanted to do with my life. And, indeed, chamber music has been my professional life. I honestly don’t think I would have taken this road if I hadn’t had such a positive experience at Kent Blossom. 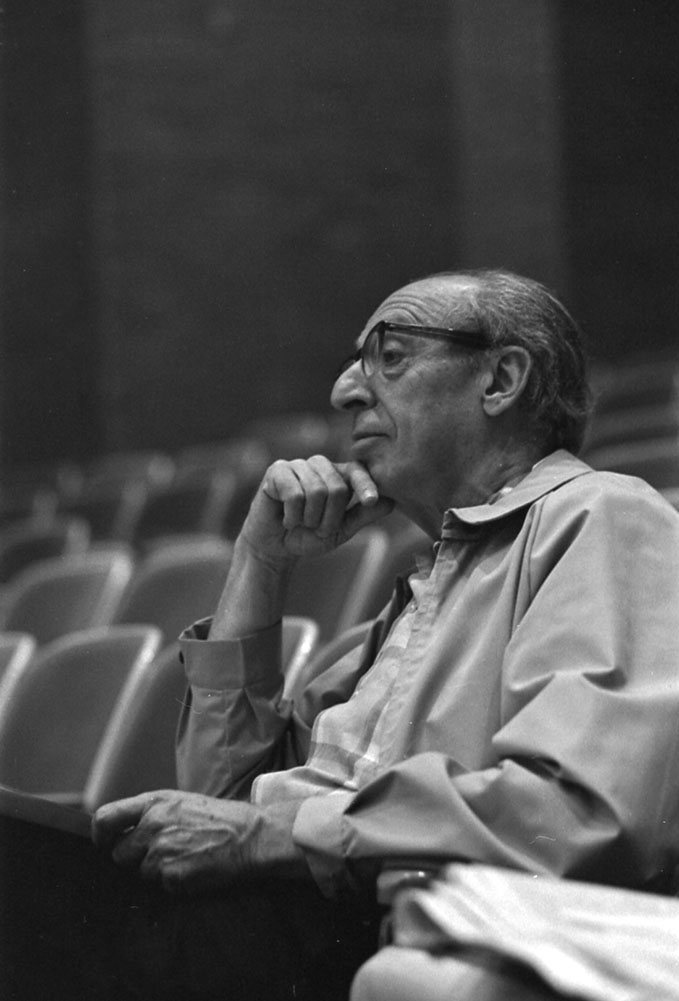 Jerry Grossman, 1969 alum and principal cellist of the Metropolitan Opera Orchestra since 1986 will join the quartet in a performance of Schubert’s String Quintet in C major, Op. 163.

The 2018 season runs from July 1 through August 5 and also includes performances from the Miami String Quartet with pianist Spencer Myer, from the members of The Cleveland Orchestra and from noted guest artists. For more information about 2018 KBMF, please visit
www.kent.edu/blossom , call 330-672-2613 or email kbm@kent.edu. 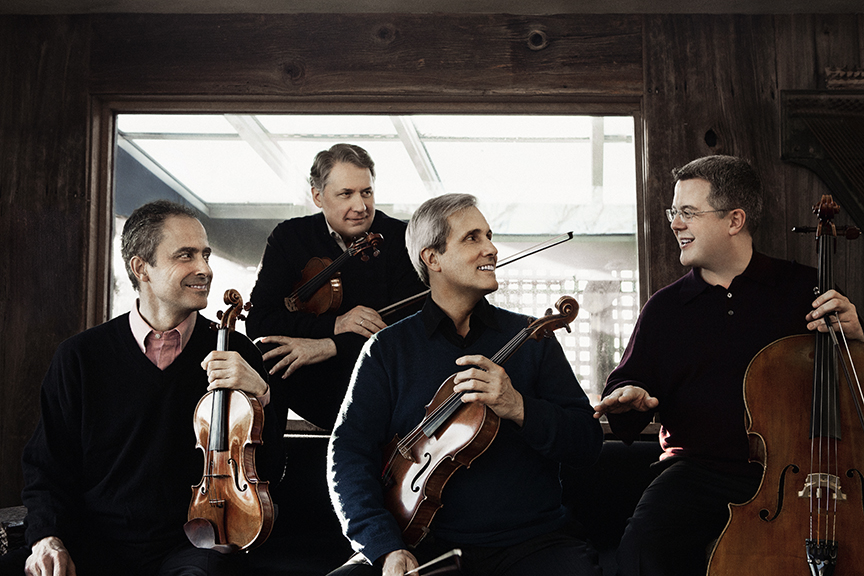 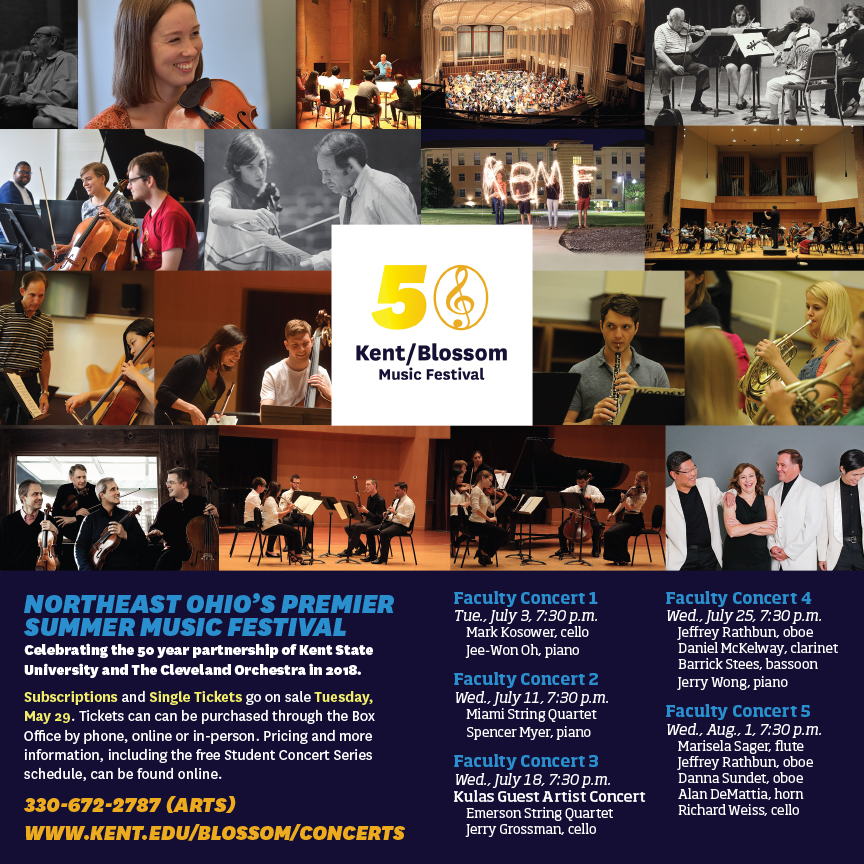